Golden Index is the award for Socially Responsible Business performance and is intended for student population. Ericsson Nikola Tesla’s Summer Camp is the laureate in the category “Project organizing for students”, and the Company is awarded for the best image, according to students’ opinion and a Grand Prix for large companies.

Golden Index is the award granted for Socially Responsible Business performance and is intended for student population. The purpose of this award is to give recognition to the companies that actively participated in students’ life quality improvement. Initiated by the organization eSTUDENT, a commission made up of students’ associations of the University of Zagreb made a decision on 2012 year’s winners.

Along with six basic awards, two more prizes were awarded. A special jury award, for the companies prominent in several categories, and a Grand Prix, as an overall award for the company with the most Golden Indexes won. In order to ensure competing equality, companies are divided into two categories- large and medium and small companies.

The Company also won the award for the best image according to students’ opinion. It was based on the results of an inquiry, performed in five Zagreb’s faculties, by the company Hendal Market Research, the project’s partner. 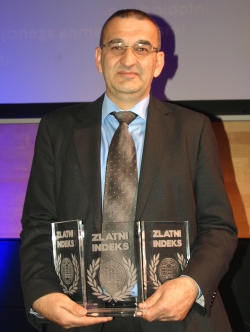 As the Company with the most Golden Indexes awarded, Ericsson Nikola Tesla won the Grand Prix for large companies.

On behalf of the Company, Dr.sc. Darko Huljenić took the award, and commented:

“A socially responsible business performance is something our Company cherishes all the time. Therefore, we are exceptionally pleased when we were recognized for it by the wider community, in particularly among groups that these activities are intended for. This shows, how our Summer Camp- which we can say, after 12 years now, is a traditional one, was once again proven to be recognized and supported among students. We are pleased by the fact that throughout mutual activities, we are achieving direct collaboration of students, educational system and economy, which is the only way for a long term sustainability and prosperity of the society.

Through such investments, the Company helps achieving better education and enables participants to express their creating potential, which also means greater students’ satisfaction. And in the future, when they join our Company, we shall continue to mutually create innovative products and added values for the community. I would like to thank the students for recognizing our positive energy in enabling our better common future.”