The Croatian Consortium among the total of nine countries included in the Paneuropean project named HeERO (Harmonised eCall European Pilot) was awarded a special prize for the most successful implementation and testing of e-Call, and Ericsson Nikola Tesla is a technology partner in this important project.

The award was presented in Riga on April 17 2013. at the ceremony organized by European Emergency Number Association- EENA. On that very day the company achievements related to e-Call were presented to the high delegation that visited the company. The participants of this respectful delegations were King Carl XVI Gustaf of Sweden and Queen Siliva, the president of the Republic of Croatia  and his wife Prof. dr. Tatjana Josipović, the president and CEO of Ericsson Corporation, Hans Vestberg, several ministries from both Croatia and Sweden, as well as the heads of many companies from home and abroad. 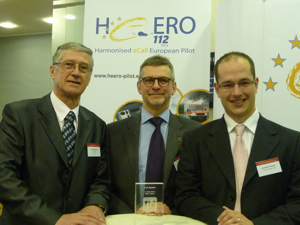 At the ceremony in Riga, Ericsson Nikola Tesla was represented by our specialist Krešimir Vidović. The award presentation gathered some 200 participants such as the representatives of emergency services, international organizations, as well as representatives of European institutions and technological solutions providers.  This award is an acknowledgment for a team work and the great commitment of all partners in the Croatian project, and these are National Protection and Rescue Directorate (DUSZ), Croatian Automobile Club (HAK) and Ericsson Nikola Tesla being the technology partner.

Left to right: Pavao Britvić, the national coordinator of HeERO project, Andy Rooke, HeERO project coordinator and the representative of the European organization ERTICO IT Europe, and Krešimir Vidović, a specialist from Ericsson Nikola Tesla

Within the national pilot project, specialists from Ericsson Nikola Tesla made necessary corrections in mobile networks segments, thus meeting the set tasks, correspondingly.  Besides, during those activities the current Emergency service system 112 that operates with DUSZ, was upgraded. Thus, the system operators have been provided with an overview and access to information related to e-Call. Thanks to efforts by specialists and the teamwork in the consortium, the first real time e-call in Croatia was set up still in March 2012. It is expected that the e-Call services will be implemented at the national level of EU countries by 2015.  According to estimations, when the system becomes the standard one, it will save some 2,500 human lives in Europe, per year. This will also make the consequences of injuries suffered in traffic accidents, decreased by 15% both for drivers and passengers, since the emergency services will react more quickly and will reach the place of accident within a  “golden hour“.